After a sharp decline in September that left the index down 7% in Q3, the Global Cannabis Stock Index held on to early-in-the month gains, increasing 8.1% in September to 29.68: 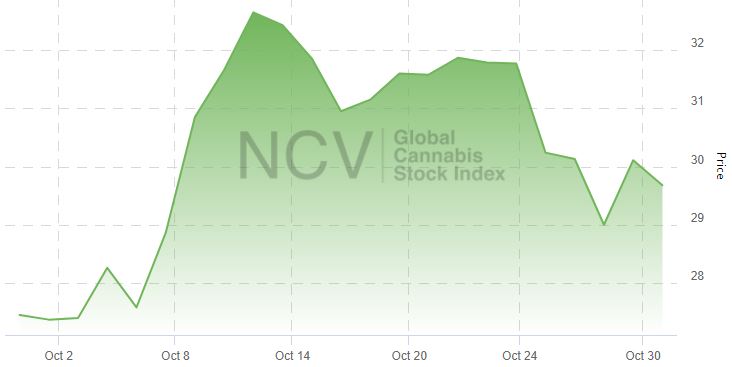 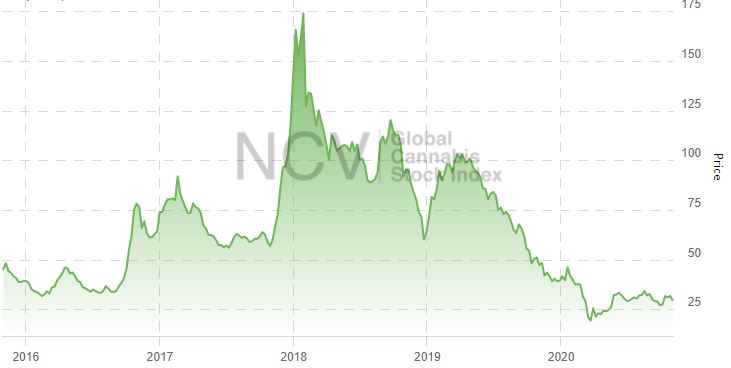 The strongest 4 names in October all gained at least 29%:

The stocks that performed the best were likely driven by the upcoming elections. Harvest, which has extensive operations in Arizona, led the way, though the stock remains down 52% in 2020. TerrAscend, which has medical cannabis operations in New Jersey, which is likely to legalize, has been one of the best performing stocks this year, up 164% through the end of October. Canopy Growth, which has an investment in TerrAscend through exchangeable shares and an agreement to potentially acquire Acreage Holdings and also has loans to both companies, likely benefited from speculation that the Senate could change control, which would enable it to enter the U.S. potentially. The stock is down 11% in 2020. Curaleaf, which is exposed to both Arizona and New Jersey and also has operations in other Northeast markets, has gained 49% this year.

The 4 weakest names fell by more than 8% in October:

Aurora Cannabis, which lost more than half of its value in September and was the worst performing stock in the index, tacked on additional losses to leave it down 84% year-to-date. The company filed a new $500 million shelf registration after exhausting its ATM by selling $178 million in shares after it reported its Q4 in late September. Taat Lifestyle and Wellness, which just entered the index for the first time this month after beginning to trade publicly in June and rising dramatically subsequently, completed a C$6.75 million private placement capital raise. MediPharm Labs posted a new all-time low that left the stock down almost 80% year-to-date despite signing an agreement to be the exclusive supplier of a leading German pharmaceutical company. Neptune, which is down 30% in 2020, was weighed down by a US$35 million capital raise.

We have also published separate reviews of the performance of the Canadian LP Index and the American Cannabis Operators Index:

We will summarize the index performance again in a month. You can learn more about the index members and the qualifications for inclusion by visiting the Global Cannabis Stock Index. A more complete analysis of the index is available at 420Investor.com. Be sure to bookmark the page to stay current on cannabis stock price movements within the day or from day-to-day.

New Cannabis Ventures maintains six proprietary indices designed to help investors monitor the publicly-traded cannabis stocks, including the Global Cannabis Stock Index as well as the Canadian Cannabis LP Index and its three sub-indices. The sixth index, the American Cannabis Operator Index, was launched at the end of October 2018 and tracks the leading cultivators, processors and retailers of cannabis in the United States.

The Biggest Cannabis Companies Are About to Report Financials