The Oakland Police Department raided Zide Door church in Oakland on Aug. 13, 2020, and reportedly confiscated $200,00 worth of cash, cannabis and psychedelic mushrooms.

The Oakland Police Department raided Zide Door church in Oakland on Aug. 13, 2020, and reportedly confiscated $200,00 worth of cash, cannabis and psychedelic mushrooms.

Oakland PD raided this church. And took all their drugs.

Religion means different things to different people. For the members of the Zide Door Church of Entheogenic Plants in Oakland, it means communing with God through a fog of cannabis smoke and hallucinogenic mushrooms.

Dave Hodges leads the unconventional church, preaching in a pot leaf-patterned robe while his congregation of up to 100 parishioners gathers every Sunday at 4:20 p.m. and smokes communal joints. Hodges elaborates on the teachings of Terence McKenna and shares spiritual experiences he’s had while taking up to 30 grams of mushrooms at once, 10 times a typical dose, and enough to make even the most fervent atheist see heavenly beings.

After only a year of existence, the church has swelled to include 20,000 members who come not only to hear Hodges speak, but purchase psychedelic mushrooms and cannabis from the church for home consumption.

That is, until the Oakland Police Department learned of the operation.

On Aug. 13, over two dozen police officers raided the church, with firefighters using a jackhammer to open their safe. VICE reported that they confiscated $200,000 worth of cash, cannabis and mushrooms, following a series of undercover purchases that included a warning from cannabis enforcement officer John Romero in April. According to VICE, the search warrant did not mention mushrooms, but rather identified the church as an unlicensed dispensary.

The district attorney has yet to file any charges, but Hodges is currently considering a lawsuit of his own. For him, the raid was not only a violation of his religious freedoms, but of the city of Oakland’s resolution to deprioritize enforcing laws against psychedelic mushrooms.

“We operate under a federal law, the Religious Freedom Restoration Act. That’s what allows ayahuasca and peyote churches that provide plants as part of their religion,” says Hodges. “We’re not different from that, that’s what we do. In addition to that, the part of our agreement with members when you join is that you own everything that is part of the church. When you’re a member, you are an owner. And under that scenario, how do we sell you anything that you already own?”

He considers money exchanged for cannabis or mushrooms to be something akin to dues, which pay for expenses like rent and an armed security guard, which Hodges stated was necessary due to nearby illegal gambling operations and a history of sex work in the neighborhood.

According to a statement given to SFGATE from the Oakland Police Department, the raid was a result of several factors. The Alameda County Health Department contacted OPD regarding an illegal business creating respiratory health issues for nearby children, as well as increased violent crimes in the vicinity. When asked about the issue of deprioritizing enforcement of regulations against mushrooms, they responded that “the Oakland Police Department does not consider any complaint from a citizen as a ‘non priority.’”

OPD also takes issue with the church’s status as a for-profit organization.

“This is the first for-profit religious establishment I’ve seen in my 28 years as an Oakland cop,” said Capt. Randell Wingate. “I do think claiming religious grounds will draw the attention of the federal law enforcement which is something we do not advocate. The legal cannabis growers and sellers who pay taxes, work with the Oakland Police Department, maintain safety plans, and follow zoning guidelines to respect the community have not drawn attention from the federal law enforcement.”

A spokesperson for Decriminalize California, an activist group that’s campaigning to decriminalize mushrooms in the state, has somewhat unexpected opinions about the raid. Although they share in Zide Door’s mission of normalizing psychedelics and believe mushrooms to be far less dangerous than legal substances like alcohol (if 30 grams won’t kill you, no dose will), they don’t think a religious defense will be effective.

“I believe people have a right to freedom of speech and freedom of religion,” says Decrimca campaign director Ryan Munevar. “But to use that in order to have a church, to sell a substance, is a unique workaround of the American Religious Freedom Act. People have tried this before with cannabis, they create these churches, and it doesn’t really work.”

He goes on to describe the resolution passed in 2019 that makes mushrooms a lowest level enforcement priority as a relatively hollow gesture.

“A lowest level enforcement priority is pretty much worthless. And it’s even more worthless if it comes from a city council resolution,” says Munevar. “If you want to use proper language, you have to address all of these specific elements. You have to address cultivation, manufacture, distribution, consumption, transport, amnesty and expungement, and taxation.”

Decrimca’s campaign to get an initiative on the 2020 ballot about magic mushrooms included all of these topics, but was derailed this year due to COVID-19 (it’s hard to get signatures during a pandemic). But their ten board members, and 1,000 volunteers across the state, aren’t giving up. A silver lining is that they now see themselves as much better prepared to mobilize for 2022. 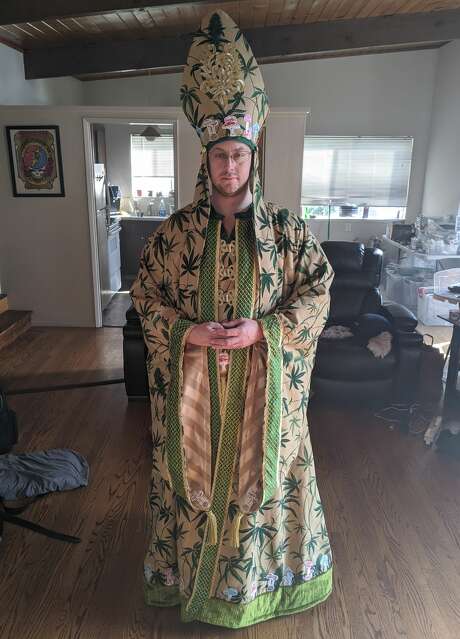 Dave Hodges is the founder and preacher at Zide Door, a church dedicated to psychedelic mushrooms that was recently raided by the Oakland Police Department.

Legal status of the raid and the future of decriminalization aside, the story of the Zide Door begs the question of what it actually means to worship psychedelics as spiritual sacraments.

Describing the formation of his belief system, Hodges cites a series of increasingly heavy mushroom trips that concluded with spiritual guidance about breathing techniques … and to take more mushrooms. Once he reached the threshold of 30 grams, he finished his trip with a different takeaway:

“The message was: Everything will be OK,” he says.

Although his interpretation goes far further than other more mainstream belief systems, Hodges cites psychedelic experiences as a cornerstone of almost all religions. He believes that the actualizations he had while under the influence of what he refers to as “god doses” overlaps with other teachings.

“One of the things I talk about in my sermons is my most spiritual experience,” says Hodges. “I saw heaven, I saw hell, I saw all the dimensions in between, and I was sucked up through all these places and landed in a place where there was nothing. It was just all white. And I experienced the perspective of God.”

From there, the trip turned more cerebral.

“If you’re God, what would you ask yourself?” he posits, sounding like he’s speaking to a congregation. “The answer is even deeper. Which is, what am I? That part of the question is where I experienced the big bang and the creation of time and all life itself. The answer of what am I is: us. God created everything to understand itself. When it comes to other religions, that’s pretty much a core teaching of all of them, that we are all one.”

Although the church’s practices are far from mainstream, their formation comes at a time when psychedelic drugs are being treated as much more than recreational substances. Science has finally come around to acknowledging the medical potential. Ayahuasca retreats are gaining in popularity, ketamine has become a widely used therapeutic and authors like Michael Pollan have demystified them for the NPR sect with his book “How to Change Your Mind.” In the past few years, science has taken almost as much interest in psychedelics as the counter-culture, to the point that religious adoption doesn’t seem as far-fetched anymore.

As it stands at time of publication, the future of the church looks uncertain as they await charges. Hodges is considering filing a federal civil case of his own against the OPD for violating his rights under the First Amendment and Religious Freedom Restoration Act, with support from a new advocacy group out of Oakland called the National Entheogenic Council. The hope is that he can continue to provide his community with religious guidance (and hallucinogenic drugs) and that others might obtain the same spiritual actualizations that he’s found himself through high doses of psychedelic mushrooms.

“It’s helped me experience God and understand religion itself,” Hodges says of the mushrooms. “For me, it is without a doubt my mission to make sure people have access to these plants for religious purposes … we’re gonna keep fighting. We’re not going away and this fight has really just started.”