Merry Jane report …… In a recent interview with Gray Television Washington News Bureau, RNC Chair Ronna McDaniel attempted to dodge several questions regarding the Republican party’s official stance on medicinal pot. In the interview, journalist Alana Austin recounted the story of an RNC delegate who used pot to treat chronic pain, and asked McDaniel whether there is “a place in the GOP for folks who support medical marijuana,” according to Marijuana Moment.

“I don’t really address policy issues like medical marijuana,” said McDaniel in response. “That’s left up to the states and there’s going to be variances between states, but that’s not something that the RNC puts forward as policy, that’s a legislative issue.” 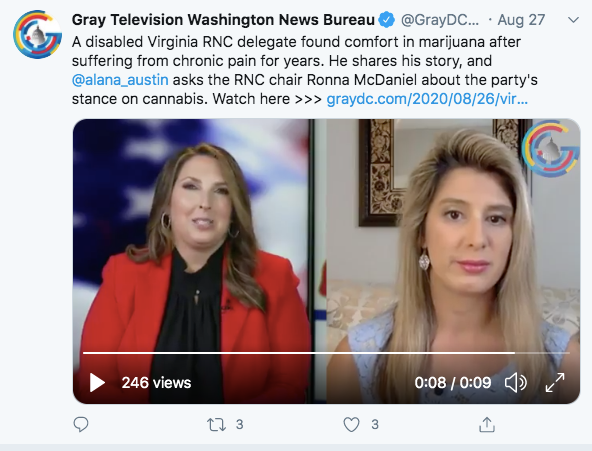 This year, the RNC is re-using their 2016 party platform without any changes or amendments, and this platform admits that in “many jurisdictions, marijuana is virtually legalized despite its illegality under federal law… This highlights the continuing conflicts and contradictions in public attitudes and public policy toward illegal substances. Congress and a new administration should consider the long-range implications of these trends for public health and safety and prepare to deal with the problematic consequences.”

Read the full story at.