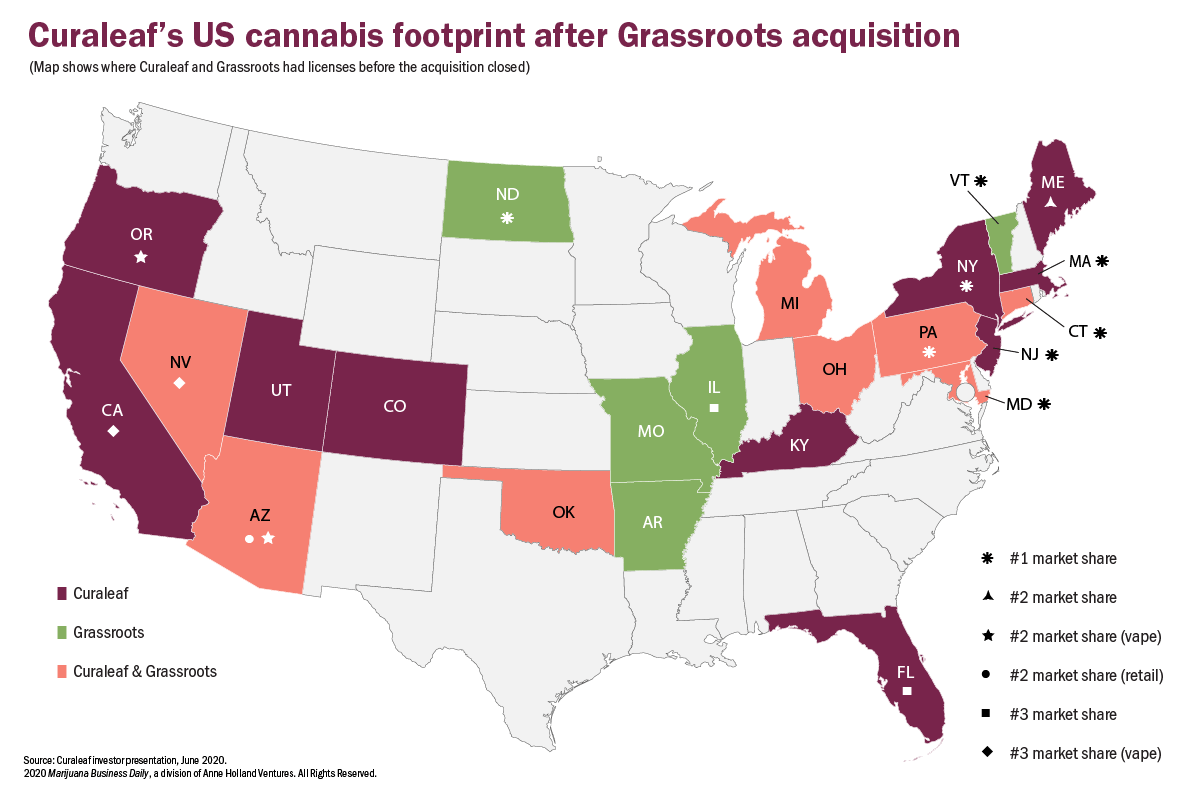 Massachusetts-based Curaleaf has become one of the largest multistate cannabis operators in the United States by adopting a broad-market approach – with scores of cultivation, processing and dispensary facilities now stretching across 23 states.

The diversified approach comes at a time when other multistate operators have retrenched and refocused operations, in part to conserve cash after investors grew hesitant to wager on cannabis and capital became tight.

While other MSOs have scrapped acquisitions in recent months, Curaleaf has completed two big deals since February totaling more than $1 billion in value: Oregon-based Cura Partners and, most recently, Illinois-based Grassroots Cannabis.

The Grassroots acquisition expanded Curaleaf’s footprint from 18 to 23 states, with 88 operating dispensaries or retail outlets.

The reasons for Curaleaf’s success so far can be attributed to a combination of factors, according to industry experts, media reports and company officials:

“Our ability to raise capital is a differentiator, and we are able to use our stock as a currency to do deals because investors and owners have confidence in the company to execute,” Curaleaf CEO Joe Lusardi said in a statement provided to Marijuana Business Daily for this story.

For example, in connection with the Grassroots transaction, Curaleaf generated 34 million Canadian dollars ($25.7 million) through the private sale of nearly 4.4 million subordinate voting shares, according to a July filing with Canadian securities regulators.

The proceeds will fund Grassroots’ expansion projects and replenish its working capital, according to Curaleaf.

Curaleaf’s stock, meanwhile, has risen since the beginning of the year.

Shares trading as CURLF on the U.S. over-the-counter market started the year at slightly more than $6 a share, slid to $2.54 in mid-March as the coronavirus pandemic scared investors, and have more than tripled since, closing at $8.58 on Tuesday. Curaleaf shares also trade on the Canadian Securities Exchange as CURA.

Aspiring to be No. 1

When announcing the close of its acquisition of Grassroots in July, Curaleaf proclaimed that it would create the largest cannabis company in the world.

Curaleaf already is at the top of the heap of U.S. marijuana MSOs, posting $121.4 million of revenue in the second quarter ended June 30.

Florida-based Trulieve and Illinois-based Green Thumb Industries were in almost identical territory, however, with $120.8 million and $119.6 million in revenue, respectively.

While Curaleaf has followed a broad-market approach, Trulieve has focused almost exclusively on Florida’s medical cannabis program, where it enjoys a dominant market share of 50%.

For its part, Curaleaf continues to emphasize what has been referred by some as a Starbucks approach to cannabis.

Jordan told analysts in a recent earnings call: “We believe our strategy of building a diversified portfolio of assets across multiple markets with strong underlying fundamentals rather than narrow focus on a few strategic markets is the key to building long-term sustainable profitability in this industry.”

He added that the broad-market approach supports the company’s strategy to build national brands such as its Select medical cannabis and wellness brand. A strong brand, he said, will enable the company to achieve higher margins.

Curaleaf officials didn’t respond to MJBizDaily queries about the importance of the Russian financial backing, nor did analysts.

But analysts praised Curaleaf for its most recent earnings report.

“Strength in the quarter seems to have been broad-based, with the notable exceptions of MA (Massachusetts) and NV (Nevada), where operations were disrupted due to COVID-related changes …,” Cowen wrote in its research report.

During the coronavirus crisis, Nevada implemented a lockdown that initially allowed only marijuana delivery and then curbside pickup, while Massachusetts temporarily suspended adult-use operations.

St. Louis-based investment banking firm Stifel, which also has a “buy” rating on Curaleaf, noted the company’s strong earnings on a cash-flow basis even while Nevada and Massachusetts operations were weak.

Both Cowen and Stifel are predicting Curaleaf’s third-quarter revenues will be in the $200 million range.

Missteps along the way

Curaleaf is not without its blemishes.

In the summer of 2019, the Federal Drug Administration sent a warning letter to Curaleaf for making unsubstantiated claims about its CBD products. Curaleaf took the claims off its website.

Later that summer, Curaleaf paid a $250,000 fine in its home state for failing to disclose a change in ownership structure to cannabis regulators.

Looking ahead, Stifel said Curaleaf’s major drivers will include adding Grassroots’ “attractive” Illinois and Pennsylvania operations as well as doubling production in Arizona, where recreational marijuana legalization is on the November ballot.

Jordan noted in the earnings call that Curaleaf also is expanding cultivation capacity to prepare for a potential adult-use market in New Jersey. Residents vote on an adult-use referendum in the fall.

“We believe the potential legalization of adult-use in New Jersey could kick off a wave of legalization in the Northeast with New York, Connecticut and Pennsylvania likely to seriously consider adult-use legalization,” Jordan told analysts.

If so, that would play into Curaleaf’s already strong presence in the Northeast.

Jeff Smith can be reached at [email protected]